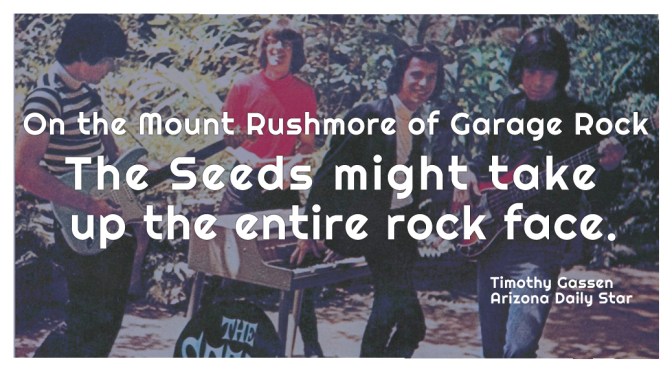 Welcome to the official site of THE SEEDS: Pushin’ Too Hard, directed by Neil Norman, of GNP Crescendo.

Using vintage footage, rare photos, memorabilia and audio, and fresh interviews with band members and associates as well as notable fans and observers, Pushin’ Too Hard relates the bizarre rage-to-riches-to-rags tale of the rock quartet who took Los Angeles by storm in the mid-60s.

The band‘s story is examined in detail in The Seeds: Pushin’ Too Hard. All four original Seeds are represented, alongside auxiliary members, band associates, and contemporaries such as Kim Fowley, Bruce Johnston of The Beach Boys and Johnny Echols of Love. Major fans like Iggy Pop and The Bangles weigh in on what The Seeds meant to them. Narration is by noted author Miss Pamela Des Barres.

The Seeds: Pushin’ Too Hard is directed by Neil Norman, produced by Alec Palao and edited by Dan Schaarschmidt. Award-winning director Norman and four-time Grammy nominee Palao have spent the past six years developing the project. The movie is accompanied by a major overhaul of the Seeds’ catalog and the gripping original soundtrack on GNP Crescendo and Ace/Big Beat Records in the UK.

Visit our EVENTS page for future opportunities to view the film in your area.

"One of the most enjoyable two hours I've spent sitting down in a long time." -The Insane Darrel Wayne, National Radio host