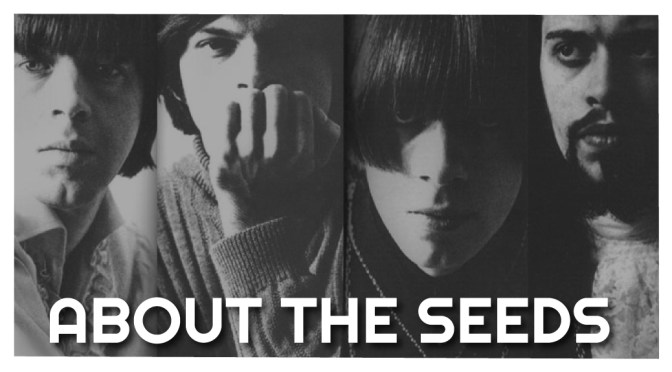 The Seeds were a real band. They were all irreplaceable. Daryl Hooper had a broad range of musical experiences from jazz, pop, standards, classical. He played the saxophone, trumpet, guitar and keyboards. He teaches music today and lives on a beautiful lakefront estate in Northern California with his wife Cathy and their animals.

The lead guitarist, Jan Savage breathed excitement and originality. His riffs came from blues, rock and surf, but he never sounded exactly like someone else. My dad, Gene Norman used to say, ‘He comes up with really good lines.’ Wow! the solo in ‘Pushin’ Too Hard;’ “I’ve heard it was the first guitar solo Eddie Van Halen ever learned”!

Drummer Rick Andridge wasn’t like Ginger Baker, who was all over the place. Rick was just relentlessly on the beat. In those days they didn’t mike up the drum sets like they do today. Rick had to hit the hell out of the drums like a freight train. You could always hear him outside in the parking lot!

In concert Sky was an animated dancer. Even on the Jimmy Maddin-produced early recording dates for the first album, you can hear Jimmy on tape yelling, ‘Sky! quit dancing around so much!’ Movement was essential to Sky in the studio and in front of an audience.

Kim Fowley, who wrote a song for the Seeds, ‘Fallin’ Off the Edge’ and also produced them in their later GNP career remarked; Sky was the one who conducted the electricity, but the other guys were incredibly important. A perfect puzzle.

The group enjoyed other hits such as “Mr Farmer” and “Can’t Seem To Make You Mine,” and recorded five best-selling albums for the GNP Crescendo label, but despite a huge fanbase in southern California, the Seeds could not capitalize on their initial chart success. The growing ego and drug-fueled eccentricities of frontman Saxon alienated the other members, and led to the original quartet’s fracture in the summer of 1968.

After 1970, Saxon renamed himself Sunlight, embarking on a strange odyssey that took him from life as a street person in Hollywood to a commune in Hawaii. Sky returned to performing in the late 1980s and, using several different sets of musicians, performed Seeds music the world over until his untimely death in 2009.

The rote rock histories of the time routinely dismissed the Seeds as one-dimensional, but the from the late 1970s on, the group’s minimalist, attitude-laden sound became a major influence upon the nascent punk rock movement and had subsequently had a lasting impact on generations of players since. Similarly the “flower power” hype that the Seeds were saddled with in 1967 now seems less important than the pulsing, exciting singular drive that is at the heart of their music.

With the punk revolution around 1977, the Seeds reputation was revitalized when they were then viewed in perspective as the “Godfathers of Punk” and true rock pioneers.

The Seeds visibility goes up and down every seven years like a Disney movie. Each generation discovers it. It’s timeless. The European fans, media, really embrace the Seeds.

The thing that is brilliant about Sky, and I’m talking about the Seeds’ recordings and his lyrics, are the universal themes that can be transplanted and interchanged. It’s amazing! ‘No Escape’ can mean anything. I’ve heard four different stories from Sky himself over the decades about what ‘Pushin’ Too Hard’ was about. I’ve had it remembered as ‘You’re Pushin’ Too Hard’ to a girl,” I’ve heard it told to me that ‘Pushin’ Too Hard’ was a Sunset Strip commentary like “For What It’s Worth”, or even, an observation about a business deal or musical situation. One radio programmer on the East Coast wouldn’t play the record in the Sixties! He thought it was sexual!

I experienced and learned lot of things being around the Seeds and wanted to share this with the world. I was a musician, then went to college, then a producer, then an executive and I’ve always wanted to make films. That was part of my career path. I went to UCLA Film School. I’ve been so busy the last thirty years in the music business, I couldn’t get around to devote the time required for a film of this importance.

It’s actually good timing ‘cause people are enjoying the music of the sixties and The Seeds legend has been growing steadily.

I started this project in 2007. At first I just had a couple of interviews with Daryl, Jan, myself and my dad Gene. We just used whatever technology was available. Every visual format since the 40’s is utilized. We’ve included live performances as well as clips from Where The Action Is, American Bandstand and Shebang.

I needed to show people the real story of just what it was like. I was there. Of course, everyone on screen has contributed their stories. So knowing the true reality enabled Dan and I to edit in such a way where it’s cinema verite and exudes accuracy.

Sky Saxon has become an iconographic figure. He was involved with so many interesting situations. There are thousands of stories about him. Now the real truth. “My credentials are unique,” as Seeds’ keyboardist and co-writer Daryl Hooper concurred, I was there for just about every step.

We’ve told a collective story on how the songs were created. Sky was a genius but he needed the band. It was a unique chemistry. That’s why if groups break up or someone dies, it’s never the same. The original foursome of the Seeds were like lightning in a bottle.

In the movie we learn that all four members, and a studio bassist, Harvey Sharpe, were sincere, talented and they all made significant contributions. They were dedicated and professional. They were imaginative and unusual. That’s why their work endures.

"One of the most enjoyable two hours I've spent sitting down in a long time." -The Insane Darrel Wayne, National Radio host